WHO ARE THE FINEST ENGLAND OPENERS?

Alastair Cook’s rediscovery of his batting form at the Oval paves the way for a statistical milestone at Lord’s. If he and Andrew Strauss put on 54 in the fourth Test this week – which may take two innings given the way bat has been paying homage to new ball in this series – they will become England’s most productive opening pair of all time. The imminence of the  achievement emphasises why Strauss has been so insistent on maintaining their partnership despite Cook’s recent vicissitudes. Read more…

TROTT GALLOPING ALONG AT NUMBER THREE AS COOK FALTERS 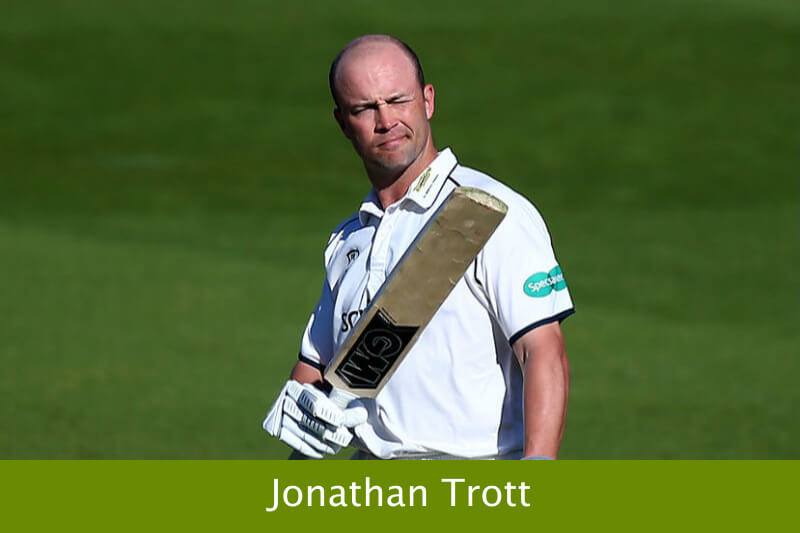 The abiding image of this match will be a flailing Pakistani fielder clutching at and fumbling the ball which to them resembled the proverbial bar of soap. Poor fielding is a common theme amongst the teams of the sub continent, the Sri Lankans being the honourable exceptions, but this Pakistan outfit were so butterfingered they should be sponsored by Lurpak. The eight drops in England’s first innings cost them 129 runs – crucial in a low scoring match -  and  Andrew Strauss could have been caught  four times yesterday. The Pakistan captain Salman Butt admitted they would have to practice harder, but levels of agility in the team are poor and if their erratic drills of yesterday are anything to go by, they won’t improve.  The fielding coach Ijaz Ahmed sliced random catches to the slip cordon only some of which reached their intended destination and half of which were dropped.

Perhaps it was Alastair Cooks lot that the chance he offered in the first innings was so easy that a Pakistani mum, to adapt a Boycottism, could have caught it in her saree. He has found varied ways of getting out in the series, strangled caught down the legside at trent Bridge and miscueing a pull, his favourite stroke, here.  This happens to people who are out of form, of course. There was no misfortune about his dismissal yesterday though. He was deceived by the length of the ball from Mohammed Aamir, thinking it was shorter than it was and playing back instead of forward. It might have skidded through a fraction low but he should have got something in the way of it to stop it rearranging his furniture. Read more…

There has been a history of extraordinary cricket at Edgbaston in recent years. Curtly Ambrose made the first ball of the 1995 test soar past Michael Atherton’s throat, over the keeper and clatter into the sightscreen. The pitch was a minefield and the match was over early on the 3rd day. In the epic Ashes test of 2005 Shane Warne produced the ball of the 21st century, making a virtual wide turn an impossible corner to bowl Andrew Strauss behind his legs as he confidently shoulded arms. It turned so much that Hawkeye, the ball tracking system, refused to recognise it as a genuine delivery.

Graeme Swann  upstaged both yesterday. His third ball of the day just before midday veered down the legside to the left handed Imran Farhat who reached out far infront of him to smother it. But England’s new device Trackman, which analyses the number of revolutions a spinner imparts on the ball, does not lie. It reveals that Swann turns the ball more than any current finger spinner. So the ball pitched outside leg stump in smiling innocence, spun at right angles and whistled a jingle as it fizzed past Farhat’s outstretched bat and crashed into the top of off stump. The batsman overbalanced in shock as much as commitment before turning to stare at his broken wicket. It must be the biggest orthodox off break ever bowled. Read more…

The heaviest defeat in first class history occurred in Pakistan. Railways made 910-6 declared and then bowled Dera Ismail Khan out twice for 31 and 27 to win by an innings and 851 runs. Unsurprisingly Dera never played another match, but the way Pakistan batted yesterday suggested  their legacy lives on. They were strokeless and clueless. Pakistan’s batsmen are proving that you can’t win a test match in a session but you can certainly lose one. Read more… 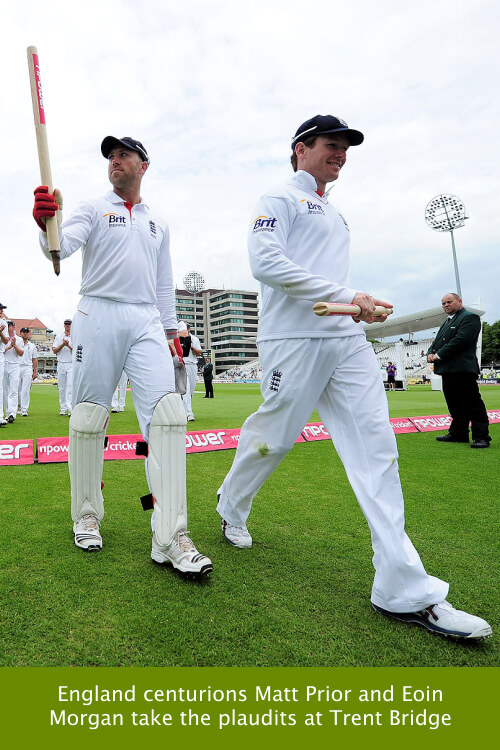 Beware the quiet man of a team. The one who says little and goes unobtrusively about his business. The silent assassin who slowly, stealthily, stifles his opponent . Eoin Morgan is that man. There is nothing showy or ostentatious about his demeanour.  He stands calmly at the crease, steely eyed, calculating, revealing nothing. He betrays no emotion. Not concern, or excitement or intent. He takes up his stance, his bat motionless on the ground. He is still at the crease, unmoved until the bowler delivers when there is a slight flex of the knees, a transfer of weight onto the toes and a raise of the bat. He moves soundlessly into position and fires his shot. Bang, the ball has been dispatched. Read more…