Andrew Strauss suggested that Eoin Morgan’s brilliant hundred against the Australians last night had a shades of the former Australian ‘finisher’ Michael Bevan. You can see what Strauss means, in that both players are left handed, bat down the order and seem instinctively to know how to pace a run chase. It is high praise, Bevan was good no question with a one day average of 53. But Morgan will be better.  Perhaps he already is.

Bevan was a fairly unsophisticated player with a brilliant eye who advancerd up the pitch and clobbered bowlers over the infield with a hearty swipe, or worked the ball into gabs and hared between the wickets. His innings were often frenetic though he obviously knew what he was doing. But a Bevan led victory charge was a seat ofyourpants job he always looked a bit chancy and rough at the edges, and he was an awkward cuss to deal with.

Morgan exudes control in everything he does. He has a calm almost tranquil pose at the crease though there is no denying his gimlet eye. Each stroke is thought out and executed with precision. There is nothing hurried or jerky. Drives are stroked or eased, and laser guided into spaces yet with surprising power, cuts are glided with a late injection of wristy downforce, sweeps are sweetly timed. There is a bit of David Gower’s lazy grace mixed in with Graham Thorpe’s busy resourcefulness. Read more…

STRAUSS IS THE MAN

People have extraordinarily short memories. Six months ago, everyone was talking about how Andrew Strauss had re-invigorated England’s cricket with sound, stable leadership and a positive approach to defeat South Africa in a five match one day series. That was on the back of regaining the Ashes and holding South Africa to a draw in a hard fought test series. But last week, after his spring break from the international circuit and England’s remarkable World T20 success, there was much  conjecture about his position as England’s (one day) leader.

No wonder Strauss was wondering around during the Bangladesh tests wearing the hunted look. People were gunning for him. Why go back on an old flawed format, they were saying, when England have just achieved unprecendented success with a bright new one?   The fact is Strauss was at the forefront of that new format, and had set the tone himself 12 months earlier in the West Indies with purposeful batting that had even the West Indies themselves taking note. On occasions he out-Gayled the gargantuan West Indies captain. Read more…

BELL GETS HIS BALANCE RIGHT 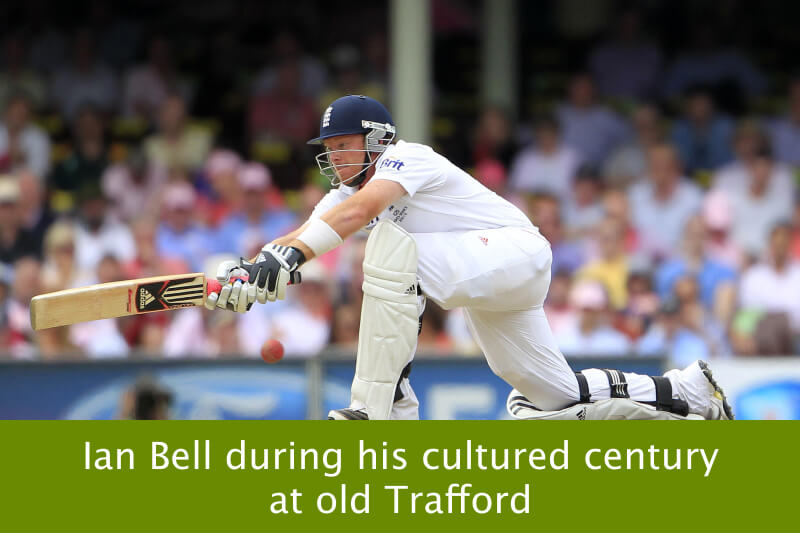 Ian Bell during his cultured century at old Trafford

Runs against Bangladesh may be regarded like goals against the Faroe Islands in some quarters, but actually succeeding against such an attack is harder than it looks. Pace is one issue. Or lack of it. Batsmen reared on a diet of near 90mph bowling have to be careful not to play their shots too early against bowlers barely touching 80. Its a situation familiar to many county players when they occasionally make an appearance in club cricket. Everything feels like it’s happening in slow motion. Well built bowlers come galumphing in to bowl, arms and legs pumping vigorously, and the ball floats down the pitch like a stray crisp packet. When you’ve been duelling with South Africa’s  Dale Steyn and Morne Morkel, facing Shahadat Hossain would be a bit like that.

Batting is just as much about rhythm as bowling. So in this match several England batsmen, including Kevin Pietersen and Ian Bell, have taken Jonathan Trott’s lead and bat out of their crease to the Bangladesh seamers. It adds a vital few miles an hour to the delivery and gets them closer to the pitch of the ball. It is a practical rather than a provocative measure. Read more…

TROTT DEVOTED TO THE CREASE 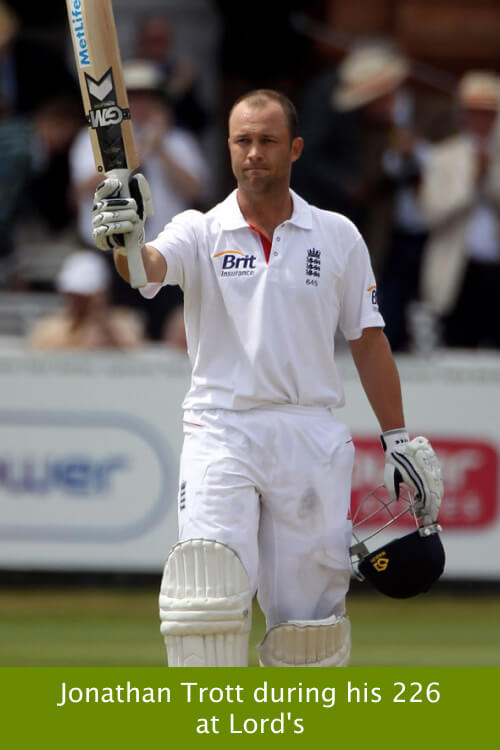 Jonathan Trott during his 226 at Lord's

Smiley, enthusiastic and highly skilled, Steve Finn will always be a popular teammate, especially if he can consistently find something in a pitch where for others there is nothing. The England team were visibly delighted at his match-winning performance yesterday and he accepted the plaudits graciously. There has been less warmth shown towards the man who set up the victory, Jonathan Trott.

In a dedicated stay of 8 hours, Trott made 45% of England’s first innings total of 505, and he scored the winning runs yesterday, contributing 262 runs in the match for once out. That is a considerable effort.  There is a suspicion, however, that he is not held to the team’s bosom quite like the rest. The sight of him remarking his guard at the end of the match while the other players were shaking hands and heading for the pavilion hinted at why. Read more…