This entry was posted on Mon, April 5th, 2010. You can follow any responses to this entry through the RSS 2.0 feed. You can leave a response, or trackback from your own site.

BEDSER WAS AS INFLUENTIAL AS WARNE 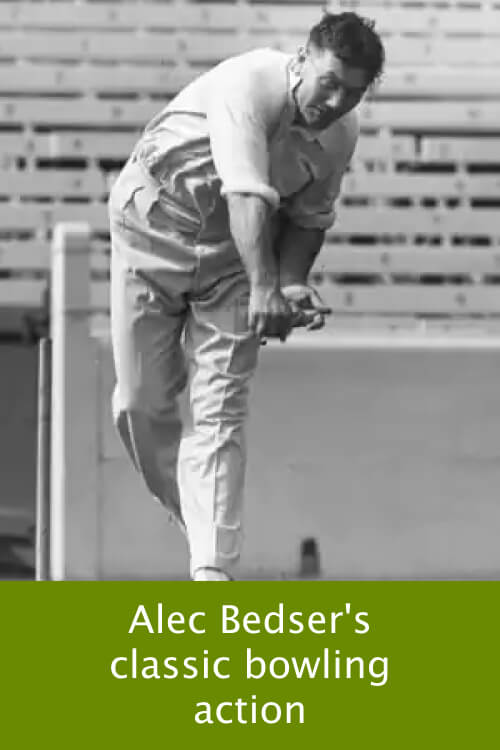 I was the last person to interview Sir Alec Bedser who died yesterday. The interview was to commemorate his 90th birthday in July 2008. Here it is in full:

SIR Alec Bedser, England’s second oldest living cricketer, will be guest of  honour at the Oval today to celebrate his 90th birthday. Supreme opening bowler, nemesis of Don Bradman, mainstay with his identical twin Eric of the triumphant Surrey side of the 1950s, long-time selector and administrator, his influence on the game spans almost sixty years and is arguably as powerful as any since the Second World War. Yet he still lives quietly minding his own business in the same Woking house that his father built in 1952 when he was the world’s leading bowler with 236 test wickets. He intends to celebrate his birthday with a pint of best bitter.

Bowlers of his generation were often summoned from coal mines. Bedser wasn’t from  mining stock, though his strapping physique and approach, suggest otherwise. He owed his unprecedented success to perseverance and accuracy, chipping away at the batsman’s resolve over after over, swinging the ball relentlessly towards the wicket with the wicketkeeper permanently stood up to the stumps, until his opponent’s concentration wilted.

He was the total antithesis of today’s bang-it-in short-of-a-length paceman. Bedser never bowled a bouncer. ‘Waste of energy,’ he says. ‘I used to aim at the stumps. I knew they were only 28 inches high and if you pitched it too far back you can’t hit em.  Mickey Stewart said he fielded at short leg and it was a year and a half before anyone hit it past him off me. I never bowled short.’

Reared on dirt pitches and indoor coconut matting, the teenage Bedsers were taken down to Woking CC by their coach – the former Surrey all rounder Alan Peach. Alec was picked in the first team to play East Molesey. ‘They asked me to open the bowling. I’d never seen a new ball before. It swung like a boomerang. I took six wickets.’ His accurate in duckers – at about the pace of Matthew Hoggard he reckons – soon earned him a Surrey trial. He and Eric, an off spinning all rounder, signed professional terms in 1939. But before they’d made their county championship debuts, war was declared.

They were called up in Sept 1939 to join the Royal Artillery at Didcot. ‘For some reason we got a note cancelling it. So we joined the RAF instead.  We were pretty lucky. A lot of those Didcot chaps I was at school with were caught at Dunkirk.’ The Bedsers were posted to  a squadron on the Belgian border. ‘We were being bombed by the Germans, they were coming through. All we had was a Colt 45 and six rounds of ammunition. There was an air raid and someone said get out so we ran away me, Eric and another bloke in to a field. This German bomber came at 500 ft and strafed us. The bullets went between us, and then we got up and ran off. I never knew what happened to the other bloke. Never saw him again. Then about 7 or 8 years ago got a letter from him, saying he was the other chap and he was now living in Newcastle. Incredible.’

Experiences such as this, and the twins’ last ditch rescue from the side of an occupied French road in a rickety van driven by a Surrey member who recognised them, explain why Alec was so relaxed on his England  debut in 1946. ‘All that – it gives you a different perspective,’ he said remembering his intricate journey on public transport to Lord’s an old leather cricket case. Or as the great Australian all rounder Keith Miller famously put it: ‘Pressure?! I’ll tell you what pressure is: it’s a Messchersmit  up your ass.’

That test debut, in 1946, after only a dozen first class matches, was remarkable. He took seven Indian wickets in the first innings, followed that with four in the second, and snared eleven more in the second test at Old Trafford. He was an automatic selection for England’s tour of Australia the following winter. It was there that he really made his name, introducing a simple new delivery as influential in its way as the googly had been fifty years earlier.

‘Alan Peach had taught me to hold the ball across the seam to stop it swinging. I didn’t try it in England, but at the second test in Sydney I was bowling to Syd Barnes and I’m thinking I can’t swing it in to him, he’s a fine legside player. So I held the new ball across the seam and it pitched and went away like a leg break.  Barnes came down the wicket and said ‘what the hell’s going on?’ Peter Smith was at mid on and he said you can’t hold a new ball like that and I said ‘why can’t I’ and I ran up and did it again. And that’s when I found out I could do it. And  I spun it. People don’t believe me but I actually spun it. The fast leg cutter, bane of top order batsmen’s lives, was born.

It didn’t do him a lot of good initially. Barnes and Bradman both made double centuries  and Bedser finished with 1-173. But by the fourth test at the Adelaide Oval he’d perfected it. He’d already removed the Australian opener Merv Harvey with it when in walked The Don. It was his home pitch. There were a few  minutes left for play and the air of expectancy was immense.

‘The ball was swinging in a little bit,’ Bedser recounts. ‘I denied him his favourite legside push to get off the mark for a few balls, and with my ninth ball I held it with that new wider grip. It swung in and pitched leg, cut away and hit off.’ There was a collective groan as the crowd realised their great hero had been bowled for a duck. ‘He said afterwards that it was the best ball that had ever got him out.’

Even more than that, it caused Bradman to initiate a special net session afterwards, in which he instructed the bowlers to focus solely on imitating Bedser’s deliveries. But in six subsequent tests, Bedser dismissed him a further 5 times. No other test bowler ever had such sustained success against him.

Aside from his relentless accuracy and prodigious movement, Bedser was famous for his stamina and fitness. He regularly bowled 1000 overs in an English summer, rarely broke down and only once left the field during a test match, and that was to be sick. He scoffs politely at the modern bowlers’ lack of overs and their proneness to injury. ‘I always bowled in the nets before a match. There’s no substitute for bowling. No good looking at videos. Now they play football to warm up. I don’t understand it. You don’t see a golfer play football before his round do you?’

And the secret of his fitness? ‘I reckon the best exercise for bowling is digging. From the age of 12 I did it all the time – on allotments or helping my dad with his building. And if you do it properly, and regularly, it exercises everything you’ve got, particularly your lower back.’

The pinnacle of his career came in 1953 when his record 39 wickets in five tests was primarily responsible for England regaining the Ashes for the first time for 18 years.  It wasn’t a lucrative business though. ‘I got 65 quid for that match but as I missed two Surrey match monies,  it was £42 quid less taxes. Plus a fiver for some quotes in the Sunday Express.’ It was during that Bedser-spearheaded era that Surrey won the county championship seven years in a row.

After his retirement in 1960, he became a test selector, enduring some of the most turbulent times the game has known: the abolishing of the distinction between gentlemen and players,  the advent of one day cricket, the D’Oliveria affair and the exclusion of South Africa,  Kerry Packer’s World Series Cricket. It was his delicate job as chairman of Selectors to remove Ian Botham from the England captaincy in 1981, and reappoint Mike Brearley, which he did by reversing the charges in a pub phone box because the coin slot was jammed. He has lived through it all with steadfastness and wise countenance betrayed by just a hint of the inevitable old cricketer’s lament for times past. ‘I can see twenty20’s exciting but I’m concerned its going to ruin the game as we know it,’ he said, eye and mind as keen as ever.’ Its like a baseball match isn’t it?’

There will of course be one notable absentee from today’s celebration lunch: his twin Eric, who died two years ago. Metaphorically joined at the hip, they were inseparable and indistinguishable, on account of deliberately dressing identically. ‘If we hadn’t people would have said we’d had a row!’ They were a mischievous pair. In one exhibition match against Old England, Alec bowled the first three balls quickish to the legendary Frank Woolley, and Eric the last three with his spinners. Woolley was foxed. ‘He went to the keeper at the end of the over and said‘ Wow that young man’s got a wonderful change of pace hasn’t he?’   They tricked umpires, barbers, barmen, ship’s captains and even female acquaintances with their interchangeable appearances. They were perfect body doubles.

Simon, I’m looking forward to you biography and comparison ( I’m hoping ) of Bedser and Warne. An in-depth analysis would be relished. Paul